I live roughly eleven inches from the practice field for the Bishop Watterson Marching Eagles. All that stands between us is my front yard, the alley that passes as our street, backyards, a row of houses, a proper street, a small parking lot, and the practicing Eagles football team. See, eleven inches. 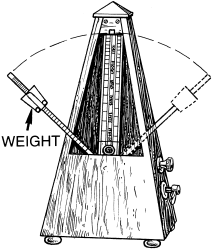 The Marching Eagles practice with a monstrous, heavily-amplified metronome. It just tocks away there, forcing glockenspiels into line. I don’t mind the band itself; if the wind is right –and they’ve been practicing –I can make out what the song is. Apparently Katy Perry’s Roar has become a marching band staple. But beneath that all is the metronome drilling down. I never got to the point in my musical career where a metronome was needed, or deemed expendable enough. My theory on how they work is that they emit a noxious tock that will burrow right through the eardrum down to the spinal cord and then out to every last nerve… The only way to rid your body of this marauder is to do its bidding: You must toot, bang, or glocken that thing you’re holding. Do it now! Do it correctly, and the tock will seem like it’s not there. At least for that round.

Block out enough tocks for enough hours, and you’re a musician. I guess that’s how it works.

The metronome sounds like the Chinese temple blocks my elementary school music teacher, Mrs. Deutsch, would let us play so we’d learn our TEE TEE TEETEE TAH’s, learn how to keep a beat. Everything was about keeping to the beat. But if you keep to the beat, you can’t hear your instrument. I loved playing the Chinese temple blocks, pealing out moist tocks for everyone to enjoy. Sometimes, Mrs. Deutsch even let me. She’s remembered as a good teacher.

But these are not the moist tocks of old. There’s no variety, no unpredictability, no life. Just measurement.

The tocks that come each day at the same time are a discomfort. Their monotonous perkiness of one note –I’d tell you what that note was if I could identify notes –cuts both over the music and under my thoughts. The tocks are lulling me into an 110bpm melancholy. You can learn a lot about yourself by looking at discomfort.

And what I’m learning now is that I’m jealous of the bandies. Listen to them over there: Doing stuff to something that in turn produces a pleasant sound.

I would give anything to produce a pleasant sound.

I sit on the porch, transfixed by the metronome, and think of how early the sorting away from musicality began.

In second grade, not long after my love affair with the Chinese temple blocks, the school’s bandleader, a nice white-haired man told me to pack up my saxophone. “I don’t think you’re ever going to be able to handle an instrument,” he said after I had tortured him for two whole weeks.

For fifth grade, I moved to a new school where the instrument sorting took place then. “You have perfect lips for the flute. We need to get you started on the flute,” said the new bandleader in the middle of placing different mouthpieces in my mouth.

This intrigued me. Maybe it was just reed instruments –your saxophones, your clarinets –I couldn’t handle. At dinner that night, I blurted out, “The bandleader at school says I have perfect lips, and I NEED to be playing the flute.” My parents looked at each other wordlessly, then said, “No,” in unison.

And in sixth grade, I was asked to leave the school chorus just because I couldn’t get the “tis of thee” part of “My Country, Tis of Thee” to sound unthreatening.

This continued into adulthood. My brother-in-law forbade me from singing to my soon-to-be niece while she was in the womb lest I destroy her ear for music. And on those rare occasions where I’m handed a pamphlet or hymnal from which to sing, I just mouth the words. I would just ruin them. When I do attempt sing, the most pleasant sound to others is the “Sorry” I mutter after I dwindle to a stop. [Click here for an example of my singing voice.]

I would give anything to produce a pleasant sound. I do manage a pretty good scary monster voice. It sounds like Satan and the song Barbie Girl had a baby which promptly then fell down a deep well. But no one has ever said, “Hey what a pleasant sound. Please, continue.” Besides, there’s no place available for “scary monster voice” in any band, orchestra, or even drum circle. And, yes, I was once kicked out of a drum circle.

The metronome gets to me because it reminds me of all the sorting that went on between me rocking the Chinese temple blocks and me standing out on my porch swearing at the sky about the relentless tock that, as I mentioned before, I cannot purge from my brain. If I had just not been sorted away from the saxophone…

Don’t get me wrong. I love music –even the Marching Eagles. But that metronome ruins it for me. It tells me that this music is not meant for me, that maybe no music is meant for me. After all, I contribute no pleasant sounds; all I do is absorb them.

I am so jealous of those who can play an instrument or sing, so jealous that I’ve become a total chart nerd. I listen to upwards of seven hours of rebroadcast American Top 40s with Casey Kasem from the 70s and 80s each weekend. AT40 functions for me like a musician’s continued sorting. It’s like I’m taking the songs from all those years I was sorted away from musicality and have decided I need to see where they fell on a particular week.

I’m a chart nerd because I’m sad I’ll never be on the charts myself, and the stupid metronome reminds me of that.

I like to imagine that there’s a giant old-school wooden metronome on that practice field, the kind with the weight on some sort of upright pendulum. Yeah, I know it’s probably some electronic geegaw, but the visual of the band’s equipment manager having to dolly out the giant metronome out to the field before each practice gives me a tangible target.

One day I’m going to march through my front yard, the alley that passes as our street, backyards, a row of houses, a proper street, a small parking lot, and the practicing Eagles football team. I’ll be carrying a can of Aquanet and a BBQ lighter.