For the roughly five years after my mom passed away, from junior year of high school then through three different undergraduate institutions, a quick tally comes up with at least a dozen trips to the emergency room. Of course, some of these were for bona-fide emergencies, but way too many times I ended up in the back of an ambulance because of –for lack of a better word –“escalations.” In this case, at the 1983 Buckeye Boys State at Bowling Green, I had run into a doorjamb… END_OF_DOCUMENT_TOKEN_TO_BE_REPLACED

I’ve actually managed to convince myself there’s some meat on these flippant wordbones. First of all, the word “ornamental” isn’t completely accidental. There’s a reason that word in all its forms was the base for a whole mess of handles on “dating” sites in the first few years after I came out. I’m a bit of a design geek, and by far my favorite architect/designer is Adolf Loos, an Austrian who worked at the turn of the 20th century. He is probably best remembered for his 1908 essay “Ornament and Crime” in which he declared –he was always declaring things –“The evolution of culture is synonymous with the removal of ornament from objects of daily use.” In his eyes, all extraneous ornament does is render an object subject to the whims of fashion; the crime part comes in when you think of all the labor that went into a thing that’s only going to wind up in the trash because folks stop liking tassels on their shoes, big-ass carved eagles on their breakfronts, or acid washing on their Z Cavariccis. You could say that one of the purposes of this blog is to get people to look past the extraneous illness and focus on the sturdy, well-made individual underneath.

Interior of the The Villa Müller in Prague.

Of course it’s not entirely accurate to say that whatever’s going on in my brain, or anybody’s mental illness, is an extraneous part of them. I was born with this, so naturally my personality developed and matured under somewhat different conditions than someone with “normal” chemistry. There’s not enough room here to go into what proportion of myself was shaped by this chemistry or by my environment or by an environment I perceive through a distorted lens because of the stupid chemistry.

Yet, there is one way that the “illness” can be seen as “ornamental.” I think sometimes I’m faking it. I know I’m not faking the underlying ailment, but I know sometimes I selectively emphasize and announce symptoms for my own purposes. I am not above using my reputation for claustrophobia as an excuse to leave a boring party or bar where all I’m doing with my life is shouting small talk over bad techno. Or there was the time when I got out of being arrested small-town Georgia deputy by staging a panic attack complete with wheezing and purple face. You could just see the visions of paperwork should I die passing over the deputy’s face. And I was voted Class Clutz of my senior class in high school, but don’t think for a second all those stair-dives were due to slippy TopSiders. Concern can be a powerful aphrodisiac. I have no illusions that my illness has made me a saint. I plan on exploring the ways I have used the bipolar to shape my surroundings to my liking. Whether that is a good thing or, shall we say, suboptimal, is open for debate.

When I started this endeavor back in ‘013, it was a “writing blog devoted to this bipolar guy’s journey…”   It’s still a writing blog because words and sentences and an over-reliance on ill-timed alliteration. A lot of keywords will still reference mental illness, and I’m not taking anything down.   However, I am no longer operating under the assumption that I’m bipolar. Or bipolar II. Or borderline. Or unipolarly, majorly depressed, or psychotic. Some diagnoses had more staying power. Borderline didn’t last long because I refused to do the workbook. The bipolars have been suggested on and off since 1985 when I mentioned “sometimes I’m up, though.” Whatever it was, my brain was diseased.

And a diseased brain needs drugs. My world soon began to resemble an early Damian Hirst installation done with way too many physicians’ samples. 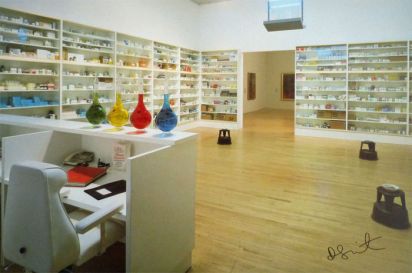 And on a small dais in the center of the room was me doing a long form performance art piece. Fancy crowds carrying plates of tiny appetizers gawk in amazement as I enact side effects in real time. Diarrhea painting! The impotence/priapism lotto! Profuse sweating! More diarrhea! And a stunning display of weight gain!  But like all performance art everywhere, this installation just peters out. The crowd slowly disperses as the the piece just sorta levels out. The highs and lows are gone. Even the diarrhea gets to be old hat. Soon it’s just a fat guy laying there, no visible emotion. Simple maintenance is never interesting. Maybe someone will buy a fridge magnet on their way out. Maybe not. Who cares?

In 2015, I had to move back to my hometown of Columbus because I was just winding down to nothing. Friends were peeling off because I was somehow both boring and suicidal. Thank god for the cat.  In Columbus I began working with a therapist who wanted me to view my brain in a different way. Instead of a diseased, structurally normal brain, maybe my brain is perfectly healthy, just odd?

As I understand it, I don’t have a bouncer. Every little bit of information is allowed in, each one of the utmost importance. Basically, I notice everything. Every sound. Every song. Every emotion. Every instance of discordant feng shui. Every word choice in every text from every acquaintance.

(He says I’m profoundly ADHD and could even be on a spectrum if that made me happy. ‘The Spectrum’ I asked. No, but it’s adjacent and somewhat overlapping. If two spectra overlap, aren’t they the same spectrum? This debate took up the rest of the hour.)

It all just pings around, and sometimes it overwhelms me. The therapist has me reconsidering many of the instances of worrying behavior that got me on the pills. Perhaps they were not DSM symptoms; instead, could they be overreactions to overstimulation?

So, what did I have to lose? Laying there, being chemically warehoused? In June of 2017, I quit the seven different psych meds I was on cold-turkey. Yes, I know that was stupid and the rollercoaster coming down was not fun, but I was very worried they would talk me out of pursuing a new path. Also, I was getting the feeling that I was just being seen as a revenue stream. (After all, why couldn’t I ever renew my scrips without seeing the psychiatrist every single month?)

And I’m sick of thinking of myself as diseased. Odd is not a disease.

It took around 18 months for me to feel my old brain coming back. I’m talking WAY too much again, sometimes even to people. I’ve lost 35 pounds. I tell myself colors are brighter. At the gym, I practice smiling (It hurts.) There are patterns again. All the birdsong. I’m itchy for stuff.

I don’t know where this will all lead, and I honestly have no idea what the hell I’m doing. It’s like moving thru an unfamiliar corridor with those automatic lights that only turn on when you’re underneath them.

And I’m running up against confusion, stigma, ageism. It’s always amusing/saddening when a supposedly inclusive space or person “others” you if you have some grey or drop a Kajagoogoo reference. Either I’m held up as everything that’s wrong with western civilization, or, if I do something surprisingly not-awful, I’m like a bear in a tutu riding a unicycle to them. Isn’t it amazing that he’s not awful?!?

I’m getting “that look” again. Good. I missed it.

I can’t control others’ reactions. You’d think with my brain being all odd and everything, I’d be able to control other people. But, it’s their thing. All I can do is plug ahead, choosing engagement over avoidance.

Now that I can, I just have to keep moving.   I’m writing about that.