Last Saturday, I participated in my first organized photography event, a Photo Walk of Historic Clintonville, the neighborhood in which I live in Columbus. We were helped along by the Clintonville Historical Society and the good folks at Midwest Photo Exchange. Hopefully one or more of my photos will be included in an upcoming gallery show.

The government cannot bestow dignity, and it cannot take it away.

–Justice Clarence Thomas (Yeah, I just quoted the second biggest judicial prick on the planet, and I realize that the above was surrounded by thought turds of the highest order. Please bear with me.) 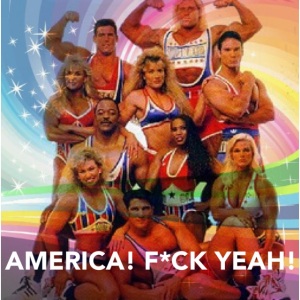 Yesterday as soon as the decision in Obergefell v. Hodges came down, my Facebook feed exploded into rainbows. Friends –the gay ones, the straight ones, and the ones whose whatever they do is none of my business –were busy expressing their approval. Rainbow filters got a work out, from profile pics to some idiot who decided the American Gladiators needed gayulating. As ton of my FB friends are gay guys who live in NYC, by far the most common setting for pictures was the street and park in front of the Stonewall Inn on Christopher Street in the West Village.

But for all the pictures with the bar’s facade in the background, not a single one was taken on the inside.

Earlier this week the NYC Landmarks Preservation Commission declared the building that houses the Stonewall Inn an OFFICIAL LANDMARK™. Apparently, this is the first building to be designated as such for its role in the struggle for LGBT rights, even though I’m told Fraunces Tavern regularly featured men in wigs and made a killer appletini back in day. If you are reading this, and you are not aware of the significance of the Stonewall Inn, stop right now and look it up.

It is incredibly heartening that Stonewall Inn is being recognized for its importance. Civil rights never move forward in a slow, steady fashion. There are flashpoints, and these physical flashpoints need to be preserved. Tearing down the Stonewall building and putting up condos called The Lofts at Stonewall would, for me, be the equivalent of tearing down the Edmund Pettus bridge in Selma and putting up Marty K’s Alabama River ZipLine Adventure in its place.

People need a physical place to rally and remember.

But don’t believe anyone who tells you that the bar called “Stonewall Inn” that has nested inside the building that held the bar involved with the Stonewall uprising has anything to do with pride. It may be a big part of PRIDE, but there is little pride inside. I do not hesitate to say that it is probably the shittiest gay bar in NYC. It’s cramped inside. END_OF_DOCUMENT_TOKEN_TO_BE_REPLACED

Last night I attended my first Pride event in Columbus. Last time I lived in Columbus, I was a frightened high school kid who couldn’t even possibly imagine that someday he would be walking around being gay, gay, gay without threat of being shoved in locker.

I happened to attend the Pride Festival in Goodale Park at Magic Hour. Unfortunately I didn’t have my new Sony A5000 because I thought I’d be going to the bar afterwards. So, all of these pics are taken with my iPhone 6 (a little to a lot of tweaking afterwards on some)… 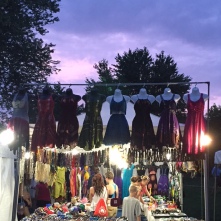 No tweaking on this one. 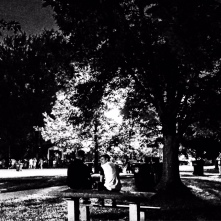 Four views from an area in transition. Columbus, Ohio.

For me solitude on a beach or in a yurt just isn’t an option. The sheer amount of people one has to deal with to get to these places outweighs the benefits. I find solitude wandering around and finding beauty in places no sane individual wanders or finds beauty. But if you’ve looked at the rest of this blog, I’m not exactly sane.

When I got the camera last week, my first outing was to an area along East Fifth Avenue in Columbus between Fourth Street and Cleveland Avenue, near the railroad tracks. The city is in the process of prettifying E. 5th with fancy street lights. Soon warehouses will give way to urban infill housing. Along the tracks, sidewalks and trees are already in.

Walking around these liminal spaces frees my focus to notice the beauty in the geometry and the splashes of color.

Oh yeah, and a bunch of thirds. 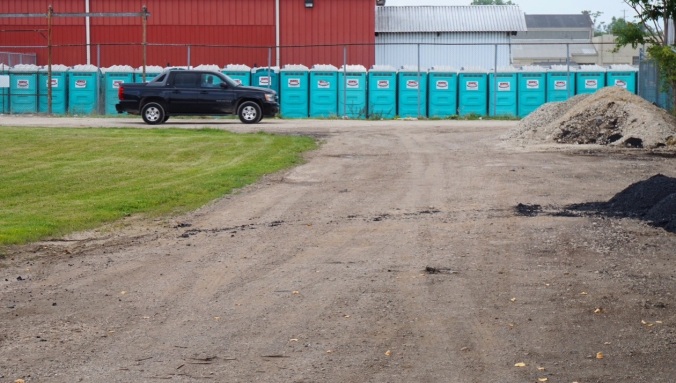 A truck alone in front of a bunch of places where you need to be alone. 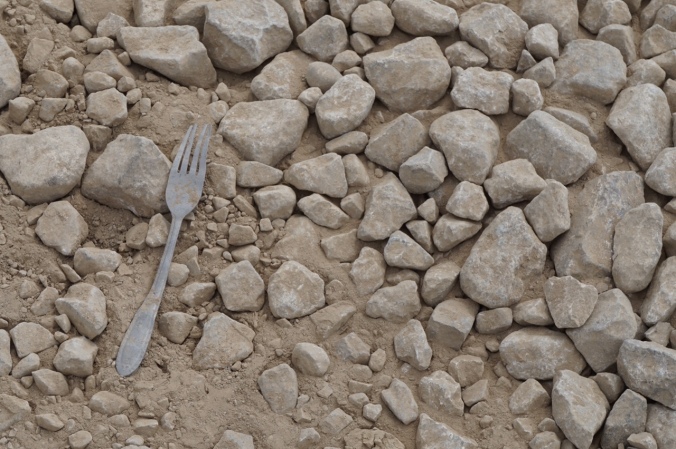 A fork. Alone. When you wander these spaces, sometimes you look down.

Same view, but now in black and white. B/W really piles on the lonliness, right?

Adena Brook in the Clintonville area of Columbus was named after the Adena Culture which flourished in Ohio between 1000 and 200 BC. If you drive around Columbus and know where to look, you can still see some of their mounds.

Even though Columbus appears relatively flat and boring, parts of it are riven with ravines. Or ravished with rivulets. Below you can see the remains of an old dam that formed a swimming hole from back when Adena Brook and its ravine were a summer getaway. The pool below the old dam is still an important swimming hole for local dogs.

For the above two shots, I think rotating the camera allowed me to foreground the doggie swimming hole nicely.

The next two shots are a few yards upstream. You can still see the sides of the old swimming hole.

Again, rotating the camera allowed me to foreground the old swimming hole and to allow the viewers eye to follow the creek. I think a vertical camera works quite well for composing shots where you want to guide the eye along a path.

It’s going to take me a few words and sentences of ever-so-pertinent background until I get to the part where I actually read a book in a bar. You’ll probably also notice, if you notice these types of things, that this is the first post since mid-February. There’s been a massive amount of writer’s block –even grocery lists were an exercise in futility. I punched myself in the head a lot. Literally. It’s a lousy coping mechanism, but at least it doesn’t work.

I always forget what reading and feeling on the same wavelength of a book can do to get one writing again. A good and museful friend who works at a major publishing house located in an architecturally significant triangular building sent me an advanced reading copy of an upcoming book from an author whom I’m admire but am not allowed mention because it’s not my place to promote this book. Also, my good and museful fears that the great and powerful editor of this book will hurl him from the roof of this architecturally significant triangular building if I reveal the name of the author.

This book has made me [adverbially] happy and has given me a “Hey let’s turn the barn into a stage and put on a SHOW!” attitude towards writing. Plus the heady scent of the cheap Scholastic Books paper on which they print advanced reading copies has fired up my wordy part of my brain stem.

And the author of the above-not-mentioned book does this kind of preamble stuff, and it works for them. So, consider the previous couple of paragraphs homage.

At the beginning of April I moved back to my hometown of Columbus to live with my sister for a while. The bipolar had been acting up for quite a while my last months in Brooklyn. Nothing made sense; everything made noise. There seemed no escape. Suicides were being planned. In the lead was a very Romantic one to be held in Green-Wood Cemetery that involved finding a tombstone with the right combo of a funny 19th century name like Hortense and an angel decaying in a pleasing manner.

However, I decided that offing myself was not really fair to the cat. Yeah, yeah, and loved ones, too. But, really the cat. Like her owner, she’s kind of obese, middle-aged, and makes a lousy first impression. A death sentence for me would’ve been a death sentence for her. Yet, the status quo could not remain. When your cat is your most definite connection to this mortal coil, maybe it’s time for a change.

My first thought when I moved to Ohio was that I was going to live some sort of monastic lifestyle. I dwelled on the disconnect: How I missed my friends in NYC; how people on a certain location-based “dating” app think phonetically typing out animalistic grunting noises counts as a complete sentence; how pedestrians are invisible to most drivers in Columbus; and how crappy that online writing workshop I signed up for through [insert name of oh-so-creatively named nonfiction magazine here] turned out to be. But when I found myself four thousand words into an essay I had titled “The Ouroboros of Disconnect,” I figured it was time for a change. Stuff was just happening TO me –sometimes even AT me. That’s not the formula for interesting wordsmithing. Besides, I couldn’t figure out a way to end the piece.

Get it? Yeah, it was four thousand words of ouroboros metaphors. And puns. Ouroboring!

So, I made a decision to seek out connection. During all this disconnect, I have come to the conclusion that I am not, in fact, an introvert. I am an extrovert with crippling social anxiety. I draw energy from people, yet I don’t understand how one is expected to deal with them. END_OF_DOCUMENT_TOKEN_TO_BE_REPLACED

On days like today, I really miss the times I dealt vintage.  I wish I could just jump into a car, drive to the bad part of town, and dig thru crap.  Always got me out of my toxic head.  And there was the chance of finding something shiny for 59¢.