[Two years ago, I devoted a Tumblr called $1.98 Advent Calendar from the C-Town to the cause of taking the Baby Jesus on adventures thru the City… plus what was going on back at the manger… plus what candy I got that day… You should check it out.  In addition to these regular features, which will remain there, I am moving a few longer essays over to this site for safe-keeping. This essay was updated and polished somewhat in the process.] 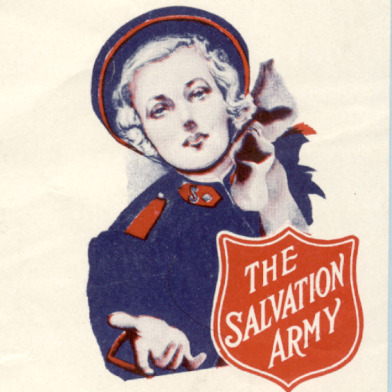 For the most part, I love living across from a fine grocery store like Steve’s C-Town.  I can get inexpensive Diet Coke seventeen hours a day, and the cat loves watching the delivery trucks every morning.  But, during Christmas season, the C-Town becomes a focus of holiday tsuris.  If I turn off my music, and there’s no B61 laboring to get up the hill on 9th Street, I can hear it —the faint sound of the Salvation Army bell ringer.

Now this sound doesn’t rate as a noise.  It’s not waking me up, unlike the Lesbians in the Ceiling clomping around in their kitchen, which for some reason is over my bed. These women, upon returning home, must unscrew their normal legs and screwing on peglegs.  It’s also not subjecting me to intimate details of its life, unlike the receptionist from the dental clinic next door who sits on the stoop under my living room window, smoking and gabbing.  No, this sound doesn’t make me mad.

It makes me unbelievably sad.

It didn’t always used to be this way.  The Salvation Army bell ringer was always one of the first harbingers of Christmas back in the days when Christmas began when it should, not as part of a back-to-school sale.  Dropping my change in that bucket always filled me with pride, like I was part of something bigger.

Then a few years ago I was entering Grand Central Station to catch a train to Katonah, and I put a dollar in the kettle.  I halted; I was filled with something other than holiday spirit, something bigger that I wanted to be a part of. I doubled back —this bell ringer was HOT! Imagine a beefier Ben Affleck with an “Argo” beard and in a ridiculously retro, perfectly tailored uniform.  The Salvation Army got another $10.  I chuckled to myself at my shallowness and felt that this would be a cute little anecdote to share on the Facebook.

Then the comments began:

“How can you give money to them?  They hate the gays!”

“They force LGBT couples to separate if they need assistance.”

I felt like I had given $11 to the NAMBLA wing of Al Qaeda.  I don’t like feeling like I’ve been had. Moreover, I am by nature contrary, and I have some acquaintances who cry discrimination if the busboy doesn’t refill their water. “He’s not coming around because we make him nervous” So, I did some checking on this accusation.

Turns out the Salvation Army isn’t a charity.  It’s a church, and is therefore not subject the rules that govern charities.  I also found out that they have a policy of non-discrimination in regards to whom they employ and whom they serve.  Whew… I could go back to dropping my change in the bucket without shame.  More importantly, I could have something to shoot back with whenever someone went on a discrimination tear about a childhood memory.

Then I came to this sentence:

“A relationship between same-sex individuals is a personal choice that people have the right to make, but from a church viewpoint, we see that going against the will of God.”

My heart sank.  I knew this sentence.  I had heard it my whole life whenever “good” people talked about the gays:

Love the sinner, hate the sin. If you ever want to watch me throw up a little in my mouth, say that little aphorism. Mmmmm. Delicious bile.

Love the sinner, hate the sin is:

However, as brave as I may sound now, I’m afraid to walk past the bell ringer.  Why do you this picture looks like it was taken from a block up the street?  It was. The closer I get to those bells, the more my lower intestine clenches. The ringing conjures up a shame-based session of irritable bowel syndrome that sends me scooting by as fast as possible.

I wish I could go back to those carefree days of liking the bell ringers.  I know that the guys ringing the bells for the most part are not members of the Church.  It is someone they’ve helped.  I really want to give them my change.  But it’s like when discovered those wrapped gifts at the bottom of my mom’s hanging garment bag.  The tags said “To Chris.  From Santa.”  Can’t put that genie back in the bottle.

I wish we got more innocent about Christmas as we got older.