The distant sound of transport*

*No, this is not the rejected title of a Pink Floyd from their sad late 80s chapter. 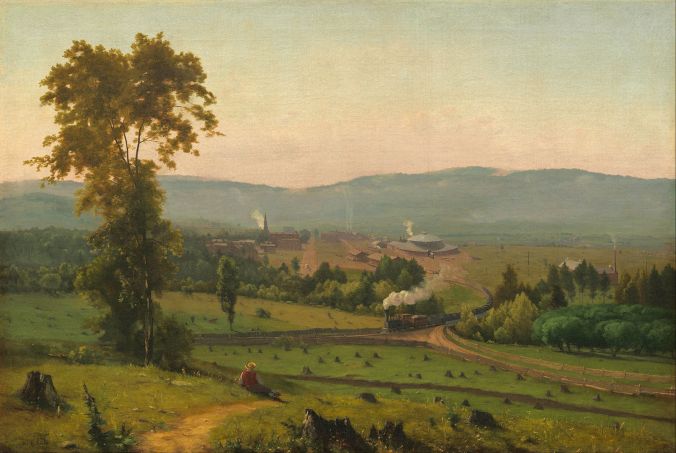 Because this is the frozen hellscape Ohio where the ice weasels roam, it’s been really cold the past few nights. Before I go to bed, I like to stroll around the yard to wind down. Most nights the cat accompanies me. She really doesn’t like to go outside during the day because birdsong frightens her. Some really bloodthirsty wrens had a nest near the porch this summer.

On nights like this the air is clear and cold like leaded glass in an old casement window. It’s frozen, but you can sense movement; the glass is thicker at the bottom. It’s flowing. The higher up you go, the thinner it gets until the glass will shatter if you so much as lay your eyes upon it. That’s how it feels to look at the stars. 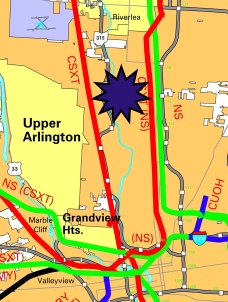 One would expect, or hope, the night would be silent. It’s not. I live in the middle of Columbus, the largest city in the Midwest that’s not Chicago. There’s stuff going on. I live a block from High Street. One mile to the east are the CSXT and NorfolkSouthern railroads and I-71. One mile to the west lay both the CSXT tracks and six lanes of OH-315.

People and things and stuff are moving up and down these corridors all night long. Most nights, it’s just a soft woosh, about as loud as one of those beige metal white noise machines your shrink has outside her office. But on these nights, I can hear each individual car, truck, and boxcar. I even imagine I can tell whether a motorcycle is a Harley or some Japanese rice rocket —as the owner of the only motorcycle I have ever driven referred to his Yamaha. For the record, I went ten feet… and into the side of an Accord. Therefore, I am an expert on what bikes sound like.

It’s like lanes and lanes of individual stories to my east and to my west, heading north and south. I am surrounded by lives being lived, stuff getting done, things being used.

I am alone, but I am a part of something. My world is large even though I dare not venture out of the cat’s sights because, you know, wrens.

Distant transport has always sparked me. When I was a small child on Long Island, I fell asleep to the sound of traffic on the Long Island Expressway. Our street ended at Exit 50. By the time I was eight, I could tell what the weather was like even before I opened my eyes. Tires on dry pavement have a different pitch than on wet. Icy pavement screams.

These are the machines in the garden, just waiting to take me out of my idyll. They appeal to my nomad brain, teasing me with what’s beyond the horizon.

But… I learned that the LIE was a different monster when I would visit my friend Francesca Klein. She lived up the hill, on Petit Court, and her backyard WAS the Long Island Expressway. Francesca liked telling elaborate stories in an odd cadence that made little sense if you didn’t catch every detail, but each car that screamed feet from her patio doors would jostle me out of the narrative. I don’t being jostled, just ask anyone who’s ever tried to get a beer with me.

A lot of Francesca’s stories involved cars that ended up next to her swings or that time a person hurt in an accident came to the patio doors and banged on the glass. Being too close to transport is scary. Cars are big; trains are even bigger. They go fast. Force equals mass times acceleration. It’s expressed in Newtons, which is too ridiculous of a unit of measure to be killed by. Dreaming of hopping on a boxcar and eating beans with jaunty hobos is one thing. Standing next to a moving train is another thing that recalls that time you swore you were going to tump off the subway platform into the path of a G Train. The G Train is a coward’s death.

But from a mile away, it’s nothing to leap up from the alley and onto something going somewhere fabulous —even if it’s just heading down to Cincinnati. Cincinnati is exotic destination on clear nights. They have hills. That’s a change, and change is good.

I first encountered the painting at the top on the cover of Leo Marx’s seminal 1964 history book The Machine in the Garden: Technology and the Pastoral Ideal in America. While researching what the name of the painting was, I stumbled upon a page that must’ve been made by some American Studies prof sometime around 2002. There, next to The Lackawanna Valley was The Peaceable Kingdom, which I just happened to mention in Day Two of this exercise. 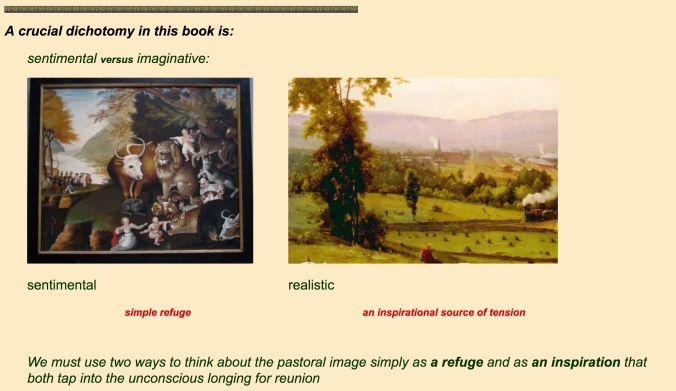